You have the right to remain…empowered

There May Be No Words, But There Are Actions 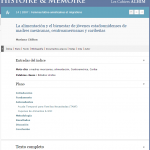 Wednesday, September 29, 2021 - Watch the Recording for a Virtual Town Hall on the Unequal Impact…

Prenatal WIC Is Associated with Increased Birth Weight of Infants Born in the...
Top Scroll to top